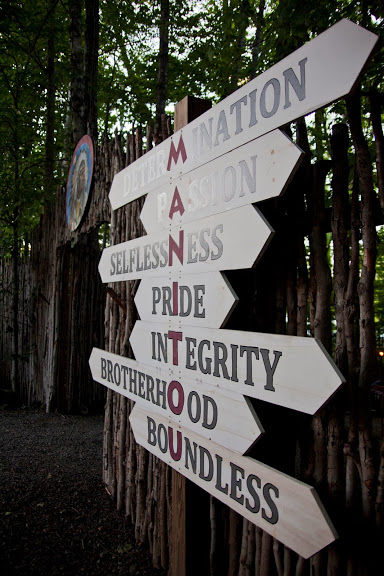 Once a week the camp comes together, usually at the waterfront, to reflect upon what we have experienced and accomplished, as well as what we have to look forward too. Typically, a staff member, a camper, or another elder statesman of camp shares a story of a memorable camp moment or person. At the end of camp meeting, one individual is chosen to read a “letter home” to his or her parents. The individual chosen represents the values we hold dear at camp. It is an honor to be asked to read a letter home.

Last night, we heard from former camper and now counselor, Sam. Sam took a break from camp, and after graduating from Tufts University this past May, was thrilled when the opportunity to come back presented itself. We thought his letter was so good that we should share. Enjoy…

It’s hard to believe that it’s been over a month since I kissed you guys goodbye and took the drive up to Waterville for my 8th summer at camp. I talked with other longtime Manitou guys over the offseason to get a sense of how the place had changed, but I know you remember our conversation about how beneath all of my excitement, there was a part of me that was petrified to return to camp. I mean for starters, the guys that I looked up to when I was last at Manitou no longer had the opportunity to return . How I would fit in with my new coworkers? How would I fit into a camp that has grown and changed since I left in the summer of 2008? And most importantly, I was nervous over whether I could live up to the responsibility and example of the counselors I had when I was a camper.

Remember I started at Manitou in 2002, as an unconfident and unathletic 10 year old who felt like I had no chance of succeeding. Trust me, I remember that kid. But in spite of my demeanor, or perhaps because of it, I returned to this place year after year and made too many memories to count with people that I consider to be some of my closest friends. For 7 years Manitou was my summer home. I began to shed my awkwardness and develop confidence, going so far as to actually talk with girls during socials and then eventually trying out for college league plays. I learned how to compete respectfully and intensely with my friends so in a moment we could be locked in for a match on the handball field and then the next we would be laughing and rehashing the plays of the game, only minutes after the final whistle. I acquired an appreciation to just be sitting around with my Manitou family, listening to the sounds of the lake, and taking in the best sunset this world has to offer. By 2008 camp was safe and it was comfortable and it was truly my favorite place on Earth. But life has a funny way of getting in the way and after my CIT year it became clearer and clearer that the following year I wouldn’t return as a Junior Counselor.

Without my summer home to return to, I went through the summer internship grind. Each summer I would put on a suit and begin my commute to the office for the summer. Some of the jobs were interesting, others bored me to tears but none were nearly as fun or rewarding as the summers I spent at Manitou. I couldn’t help but feel jealous as I heard stories from my friends at Manitou about Color War Breaks, Pres Nights, and the everyday camp moments that you take for granted while you’re here.

What we experience at Manitou is unlike any other place on Earth. There is this secret that only people who have been lucky enough to stumble upon this place understand. And you may try to talk about your time at Manitou with other people, but you know that they can never really get it. It’s the smile that comes to your face when you hear a Pres Night Song on the radio. The memories that come rushing back when putting on that old college league shirt. The chills that wake you up in the night when you dream about an electrifying meeting place speech. The way that just by sharing Manitou as a bond, you can suddenly become best friends with someone. Or when you have an opportunity to catch up with your old camp friends, and the time you’ve spent apart melts away and its as if you’ve been together all along. To me, that little secret that we all share, that’s Manitou Magic.

I never had a true appreciation for this last aspect of Manitou Magic until I came back this summer. Pulling into camp at 10PM for the first time in 6 years I was an incredible rush of excitement, nerves, and anticipation. I had no idea who was coming back for the Summer, whether anyone would know me—much less remember me–and how different Manitou must be after 6 years away. But I walked up to my co-counselors in Alumni Hall and hoped for the best.

Instantaneous. That’s the only way that I can describe how quickly I was welcomed back
into the Manitou family. Some people did remember me, and those who did not welcomed me. Regardless, they began catching me up on 6 years of camp history, on the outlook for this summer of 2014, and how
genuinely excited they were that I was returning to camp. The love was real, the bond was special, and I knew at once that it was going to be a special summer. Manitou breeds this genuine emotion. The enthusiasm of college league, the silliness of “Dancing with the Deans,” the love we all share for this place; and the friendships that form as a result. It generates real emotion from the best kind of people, and can quickly form long lasting bonds of friendship between two total strangers. It’s hard to imagine another place where you can feel like brothers with someone after only a week of knowing them.

Maybe that is why I decided to come back to Manitou after all of this time. That despite the people and physical appearance of camp changing, and all my nervousness about the minutia of who’s here and what’s ostensibly different, deep down I knew that the spirit of camp is timeless. People will always come to this place for comfort to be themselves and feel uninhibited emotion. To share that special bond that can only be shared by two people who have spent time at Manitou. To step back from the pressures of their life during the year and search for peace and perspective. And of course to have as much fun as possible with friends you cannot find anywhere else. It may seem silly to people who have never been, but then again they’re not in on our secret.

I hope everything’s going well at home and I can’t wait to see you guys when you visit.