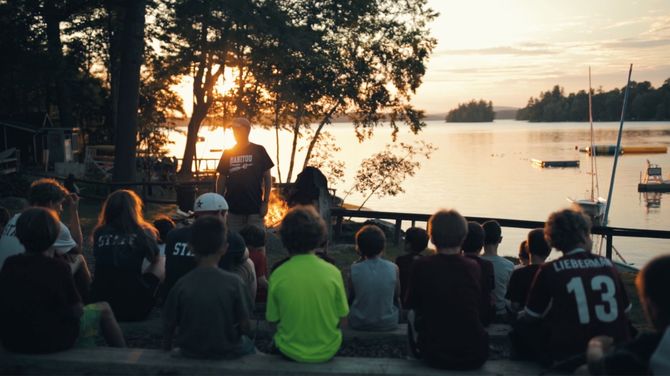 Once a week the camp comes together, usually at the waterfront, to reflect upon what we have experienced and accomplished, as well as what we have to look forward too. Typically, a staff member, a camper, or another elder statesman of camp shares a story of a memorable camp moment or person. At the end of camp meeting, one individual is chosen to read a “letter home” to his or her parents. The individual chosen represents the values we hold dear at camp. It is an honor to be asked to read a letter home.

Last night, we heard from a former camper turned counselor turned College League dean and Color War chief who now works with our CITs and our Leadership Program. Dan has experienced camp from several different perspectives (maybe one day he will be the parent of a Manitou camper) and did his best to articulate how camp has shaped him. We thought this letter he wrote a few years ago was so good that we should share. Enjoy…

Can any letter to you ever top that?

2004, you received that letter and— I know because you’ve told me—opened the envelope expecting the story of my second summer at Manitou. Of new friends. A letter love your ten-year old son, Daniel. But instead:

Your first impressions: scrawled handwriting, barely readable. And, most importantly, who the heck was Dan? What had he done with Daniel – your son?

I’m sure that you’re taken aback by this note. It’s pretty unlikely that I’d be writing a letter to you from camp. In eight years as a camper, I wrote you almost nothing, and most letters that you did receive from me were, like that 2004 one, obligatory. Required. Short.

But as unlikely as this letter is, even less likely—let’s face it— was Daniel — nine years old— coming to this camp in the first place. Not only did I know nobody, and not only were there almost no kids from Baltimore — but this was a sports based camp and I was not an athlete. (I told you before I left that I hated all sports – you said, Daniel, you like swimming. I said I hated all “ball sports” — you agreed that might be true.)

When I arrived, I stuck out like a sore thumb. Many kids went to basketball instructional; I went to computer animation. Other kids knew MLB standings by heart; I couldn’t name the teams in the AL East. In college league, I struck out in softball, air-balled layups in basketball, and whiffed kicks in soccer.

But unlikely as I was, by some miracle, I began to do well here.

In the bunk, I became close with Clay, Sam, Evan, eventually Chason and Karon and Noah – those last names more familiar to people still at Manitou. I played cards, heard camp stories, drank milkshakes, bugged our counselors by unionizing with the other kids and refusing to clean the bunk. I waterskied, and practiced for pres night, and watched the sunsets with bunkmates at the waterfront when I was in 8B. I stood awkwardly on the sidelines at socials with my friends for a few years, and then made still more awkward attempts at getting girls with them when I got older.

And so “Dan” was, I hope you see, too busy growing up in a community with people he loved and cherished, and with _balance_— to write anything to you more than “Mom Dad Zachary – Letter check. From Dan.”

At some point along the way, Mom and Dad, I got a little lost.

I knew that camp was special, but started to get confused about what exactly was so special about it. I’ve told you a million times about college league, the competition that runs through camp. And I do believe college league changed me. As I grew up through college league, I started to care more and more about it – give more effort. And this coincided with me developing a love for sports at home. Deans gave speeches at meeting places, and I became a better speaker. With more competition, I grew more competitive. Each year, college league seemed to be a bigger part of my experience. And so I fell into a classic Manitou trap. I started to think of my time at camp as sort of a trajectory towards dean year. A lot of former campers do this. I would keep coming back — I said internally — because I wanted to be a dean. And then that would be it. I would never be back after, because there was nowhere left to go.

As a first coach in 2013, I literally spent five hours each day working towards college league. As a dean last year, I barely thought about anything else.

Last year, I thought, would be the best summer of my life. Coming out of it, I would feel resolved. It was the culmination of this journey through college league, and—like most deans — I wouldn’t be back here after. When I left last year, though, I somehow felt incomplete. My sixteen year olds make fun of me and say that this is because my team didn’t win. But I don’t think that’s true. I think I felt incomplete because I had the wrong story:

Working as a dean last year was awesome, and I had an incredible time with the Trojans, who I loved in every way. But in spending so much time with the team, I lost track of a lot of people who weren’t on it, and a lot of things I love here that don’t involve college league.

The story of Dan growing up here was never about college league molding him, or any one event. It wasn’t about the camp program. The miracle of Dan succeeding despite his unathleticism was never about exposure to sports.

The story and miracle of Dan growing up was always about living in a community.

I bring all this up now because I’m realizing it chiefly this summer.

Being back in a year that I thought I would never want to be back, in a job that little Dan never would have imagined he’d have, I’m having the summer of my life— no thanks to College League or the program, which are both great, but thanks to the people around me and to the sixteen-year-old kids in my unit who I’m proud to see growing up like I did: together.

The other day, I went out on the boats for an afternoon waterskiing for the first time since 2010. I went with the kids in my unit. They laughed the whole way, and made careful fun of each other for their skill and lack thereof.

On the fourth of July, I sat with the boys and my staff on the fishing rock and watched the fireworks over the lake in mostly silence. There was no competition – just all of us there with each other. It was the best night of the year.

I watch socials and, though I hesitate to compare the modern social to those that I partook in, there’s the same shared awkwardness both on the sidelines and off of it.

Even in College League, the growth I’ve seen has mostly come off the field: subtle social cues to teammates on how to be better teammates; trust and prosociality built through relationships.

I look at the kids in my unit, who I have known for years, and see them as more confident, more secure and more mature individuals that when I met them. It’s clear to me that these growths have come because of their relationships with each other.

It is the most important lesson there is, but also one of the easiest to lose: camp is not about anything you do, but about who you do it with.

And, writing in my thirteenth consecutive summer here, I see my own past as clearly as I ever have before. In the experiences of the kids in my unit, I can see why Dan’s experience was as transformative as it was.

I hope it’s clear at this point that this is not a letter home. That is, it’s not a letter to home. It’s a letter from home. And a rediscovery of home itself.

It’s the preservation of an identity, of a growing, of a childhood.

It’s Daniel trying to save Dan’s life with a story.

I love you, Mom and Dad, and will always be grateful for the day you first signed a check, and waved goodbye, and trusted that leaving your home would mean finding a bigger one.