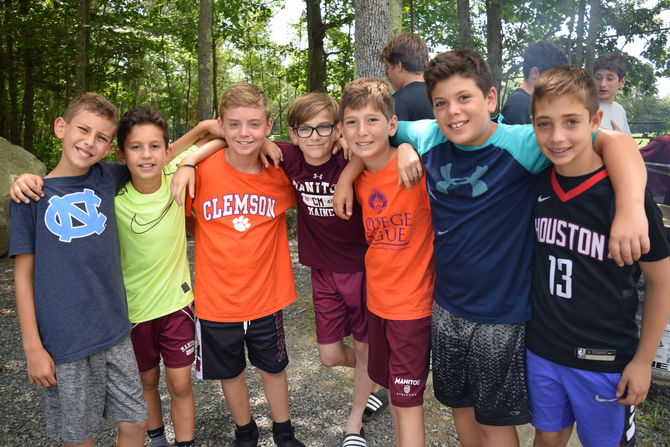 The cabin where JD and I live in the summer sits smack in the middle of camp, in an area that is highly trafficked between activities and just yards away from the flagpole hub of camp. From the adirondack chair on my front porch, I often sit and watch as life at Manitou goes by. Everywhere I look, comments become conversations, moments become memories, and campers become friends while dragging a basket of towels from their cabin to laundry during clean-up. It is during these “in between” times that some of the best stuff at camp happens.

The mornings unfold like a small city rush-hour. Directors hustle by to their morning meetings, campers run to the waterfront for the Polar Bear plunge, and the oldest campers slowly drag their way up the hill for breakfast. There is purpose in everyone’s direction and a sense of community in the rhythm.

As campers transition between instructional periods later that morning, individual routes are travelled, along with the confidence that comes from such independence. Campers are expected to have the right clothing and equipment, get from point A to point B, and sometimes travel the full length of camp to get to their next period. There is some serious executive functioning at work here and tiny everyday successes in reaching their destinations. Bonus points if their shoes are tied and their shirts aren’t on backwards.

During rest hour and free swim, I often witness the magic of wandering. It’s that aimless meandering that was commonplace on neighborhood streets before overscheduling was a thing. It’s walking in one or more directions until something interesting catches your eye and becomes your destination. Sometimes it comes in the form of a tennis ball and a tail-wagging dog. Other times, it’s a pond full of frogs. To me, that aimlessness is a childhood right. We should all wander a little more.

Finally, the sun sets and everyone makes their way back to the bunks from evening activity. There is happy chatter about College League scores or serious debate about Color War chief odds. Kids shoot hoops on the main court getting their final bursts of energy out before bedtime. The symphony of screen doors banging imprints itself on our memories as the classic soundtrack of summer. And the in between gives way to bunk shenanigans and bedtime rituals until the sun rises on another day at camp.